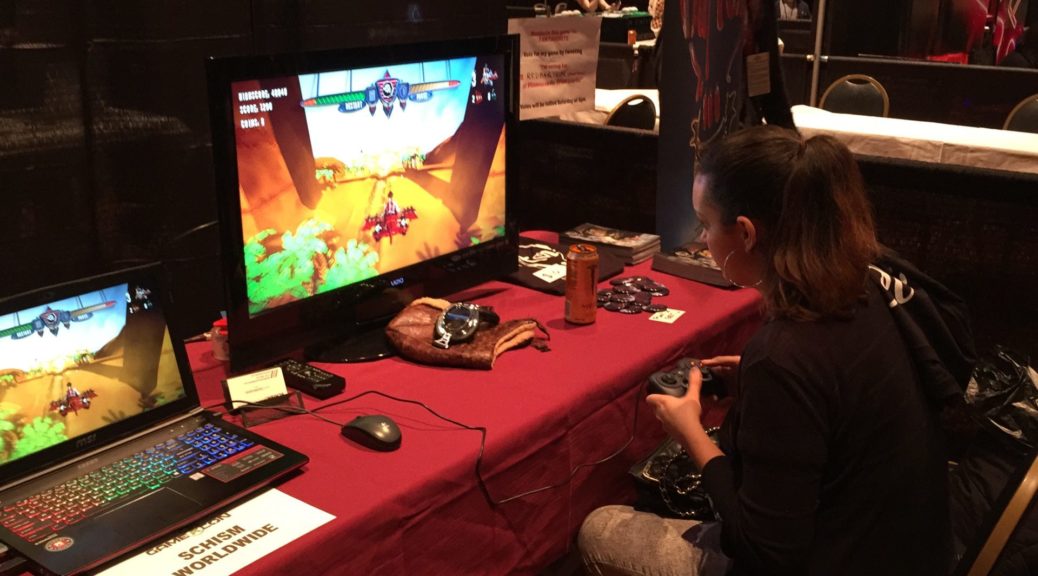 Gameacon 2016 is now over and as we go back to our drawing boards, here’s a little scoop of the action 🙂

In 3 days we got to hear some interesting talks and panels, got to hang out with some awesome folks from the indie gaming scene, both studios and individual Swiss-knife one-man-studio peeps, and present our game Red Barton and The Sky Pirates for the first time to a wider audience.

Our booth  was a continuous flow of people sharing gamer wisdom such as “I wanna play that, that looks freakin awesome” or “WHO made that high score?!” To say we didn’t expect that is an understatement, the interest was overwhelming! As someone would get up, someone else would immediately fill their seat so it was a full day of work for us to talk and elaborate on our game looks, gameplay and story.

Our high-score got beaten 3 times during Gameacon, and we’ve decided to honor the top three people by listing their names on our future on-line score board.

Here’s a bit of the atmosphere:

This being the first time we showcased our closed-beta to someone other then our girlfriends, wives, kids and close friends, we got to hear some unbiased opinions, and the feedback was unanimously on the positive side with some super-constructive gameplay feedback coming from almost everyone who played!

Considering that we’re in development only since February 2016 on Red Barton, both Kosta Zdravković‘s beautiful game artwork design AND advanced stage of gameplay were recognized by the Gameacon 2016 judge panel and we got not one but TWO nominations for Best Gameplay and Best Art Direction!!! Woot! Woot!

To put it in perspective – a studio no one has ever heard of before, has started working on their first game ever in February 2016, made a functional beta-test version and brought it to their first exhibition ever in October 2016 – and it ended up being the top 3 choice among a multitude of submitted titles, some of them on their artists workbenches for years, and a few of them being presented on Gameacon the previous year!

When the MC called our name, we just looked at each other and grabbed our phones almost instantly to get the pictures. A truly defining moment for every studio out there, I am sure! Here are our rushed photos 🙂 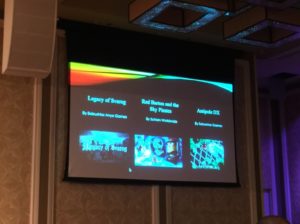 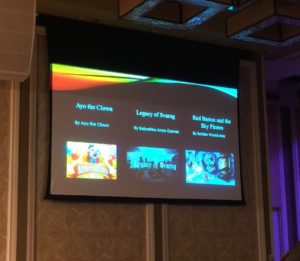 The games that were in the works and award pool on Gameacon 2015, (some of them being worked on for years!) received the deserved accolades, and we salute the hard and amazing work of the teams behind this year’s Crystal Award winners in the categories we were nominated in – Ayo the Clown for Art Direction and Antipole DX for Gameplay. We hope we didn’t make those choices easy for the jury 😉

A very special salute to our nominee buddies from Babushka Anya Games for their beautiful game Legacy of Svarog, a story-driven action RPG and adventure game hybrid set in a fictitious world based on Slavic Mythology. Also for being cool people and giving a HUGE prop sword to the winner of a little time-attack competition in their game. Great hanging out with you guys!

Greetz to all the amazing folks that were there either as exhibitors or as guests, we wish you all the best in your future endevours. It was amazing to meet up with fellow indie studios and see so much great work! Also, a high five to our next door neighbors Donald and Christopher, creators of phenomenal-looking Mind’s Eclipse!

Check all these titles out, and see if you can make it to the next conference Schism Worldwide will be attending – Beokon 2016 in Belgrade, Serbia, November 4th to 6th!